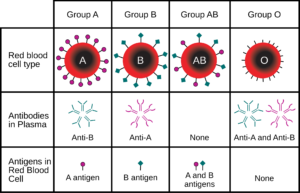 This blood group depends completely on the antibodies being produced in the blood. The RH blood group is further classified into types i.e. positive RH and negative RH. Positive RH blood group is that group in which the antibodies are present in the blood. In the case of negative RH group, there are no antibodies produced in the body and thus this is called negative RH group and this leads to the basis of differentiation between these blood types. The good thing about positive group is that it can receive blood from negative group but if negative group is the receiver, this can lead to serious troubles such as severe transfusion reactions which is something you don’t want.

So, this was all the basic information you needed to know about ABO and RH Blood Grouping. If you have any question regarding this topic, you can ask us in the comments section and don’t forget to leave your feedback as well. Keep visiting our website for more free medical tests and guides.