Examination of motor system is done under following headings: 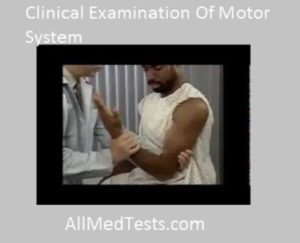 This is estimated by inspection and palpation. Measure the circumferences of arm, forearm, thigh and leg at identical level of both sides. The level should be decided in relation to some fixed, subcutaneous bony landmarks. The bony point selected may be the medial epicondyle of the humerus, the anterior superior iliac spine, the medial malleolus etc. Judgment regarding the presence of muscular wasting or otherwise depends most often on comparison of the two sides. But occasionally both sides may show wasting. Therefore, sense about what should be normal muscle for given person should also employed.

Wasted or atrophic muscles are smaller, softer and more flabby than normal when they are contracted. Muscle wasting associated with fibrosis is called contracture. The muscle feels hard, inelastic and shortened. Therefore, it is not possible to stretch them passively to a normal degree.

Muscular tone is state of tension or contraction present in the resting healthy muscle. It depends on the integrity of stretch reflex which is under the control of higher centers. Muscle tone is regulated by corticospinal and extrapyramidal pathway. Increase in the tone is called hypertonia and decrease in tone is hypotonia. The degree of tone is estimated by handling the limbs and moving them passively at their various joints.

The  muscle is said to be flaccid if there is no resistance to passive extension or flexion, even with rapid movement.

When the tone is consistently raised (sustained rise), most noticeable upon initial movement. Spasticity is unequal in opposing muscle groups.

Rigidity refers to continues equal tension in opposing muscle groups. The examinar will feel continued resistance to passive motion of both flexion and extension. Hypertonia resulting from disease of basal ganglia is termed as extrapyramidal rigidity. Both the groups of muscles (flexors and extensors) are involved in this rigidity.

3. Power (strength) of the Muscles:

The general in this investigation is to ask the patient to throw into action the particular muscle or group of muscles which one wishes to test. While the observer offers to that action a greater or lesser degree of passive resistance.

Superficial and deep reflexes are described in their respective posts.

Coordination of muscle movement means the cooperative contraction of separate muscle of group of muscles to accomplish a definite act. Absence or imperfection or such cooperation is called