Testing the power of Muscles of Upper Limb: 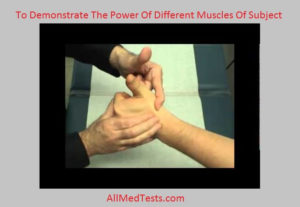 The patient is asked to abduct his thumb is a plane at right angle to the palmer aspect of the index finger, against the resistance of the examiner’s own thumb. The muscle can be seen and felt to contract.

Ask the patient to touch the tip of his little finger with the point of his thumb. Oppose the movement with your thumb or index finger.

Ask him to bring the tips of his fingers towards the front of the forearm.

Extensors of the wrist:

Ask the patient to make a fist, and try to forcibly flex the wrist against his effort to maintain his posture.

Place the arm of the patient midway between the prone and supine position then ask the patient to bend up the forearm, whilst you oppose the movement by grasping his hand.

Ask the patient to bend up the forearm against resistance, with the forearm in full supination.

Ask the patient to straighten out his forearm against your resistance.

Ask the patient to lift his arm straight out at right angles to his side against resistance. The first thirty degree of his movement is carried out by the supraspinatus and the remaining sixty degree is produced by the deltoid.

Testing the power of muscles of trunk:

Weakness of these muscles is shown by the patient’s inability to sit up in the bed from the supine position with out the aid of his arms.

Upper part: Ask the patient to shrug his shoulder against examiner’s resistance.

Lower part: Ask him to approximate to the shoulder blades.

Testing the power of muscles of limb limbs:

Dorsiflexion and planter flexion of the feet and toes are tested by asking the patient to elevate or depress the part against resistance.

Extensors of the knees:

Bend up the patient’s knee and then pressing up with your hand on his skin, ask him to try to straighten it out again.

Flexors of the knee:

Raise the legs up from the bed, supporting the thigh with your left hand and holding the ankle with your right hand. Then ask the patient to bend his knee.

Flexors of the Thigh:

With the leg extended ask the patient to raise his leg off the bed against your resistance.

Adductors of the thigh:

Abduct the limb and then ask the patient to bring it back to the midline against resistance.

Abductors of the thigh:

Place the patient’s leg together and ask him to separate them against resistance.