Tests for coordination in Upper limbs:

Ask the patient to touch first his nose with his own index finger. and then the examiner index finger. If he perform these movements without making errors, coordination is normal. He is then asked to perform the same action with his eye closed. Irregularity indicated impairment of position sense in limb. 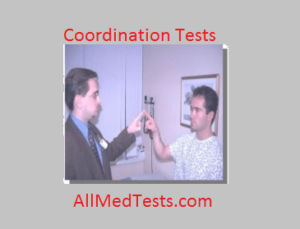 Ask the patient to make a circle in the air with his index finger. First with eyes open and then with eyes closed. All normal persons can draw a circle smoothly and accurately whether the eyes or open or closed.

The patient is asked to flex his elbows to a right angle and then alternatively to supinate and pronate his forearm as rapidly as possible. All normal persons can do this very rapidly. When movement are slow, awkward and incomplete, and often become impossible after few attemps, it is referred as dysdiadochokinesia.

Test For Coordination in Lower Limbs:

Ask the patient to walk along a straight line. If incoordination is present he will soon deviates to one side or the other.

If he cannot walk, ask him, as he lies in bed, to lift one leg high in the air, to place the heel of this leg on the opposite knee and then to slide the heel down his shin towards the ankle. In cerebella ataxia a characteristic, irregular side to side series or errors in the speed and direction of motion occurs.

The patient is ask to stand with his feet close together, and if he can do this he is then asked to close his eyes. If romberg’s sign is present, as soon as eyes are closed he begins to sway about or may even fall. This is present in sensory ataxia (loss of position sense). Cerebella ataxia results due to cerebellar dysfunctions.

Gait means the manner of walking. It is of major importance in diagnosis. Some common abnormal types of Gait recognised are described as under:

Abnormal movements present in the patients are tremors, athetosis, chorea, tics and epilepsy.

Tremors are regular or irregular distal movement having an oscillatory (vibrating) character are referred as tremors. Intentional tremors are seen in cerebellar dysfunction. These are coarse and clearly seen when the part is used in voluntary movements.

Fine and rapid tremors are seen in anxiety and thyrotoxicosis. In parkinson’s disease tremors are present at rest and disappear during activity. It frequent presence can be seen as pin rolling movements (rhythmic contraction of thumb over first finger).