It is a mixed nerve. The facial nerve nucleus is situated in the pons, lateral to that of the abducent nerve. It receives the taste fibers from anterior two thirds of tongue through lingual chorda tympani nerve.

All the muscles of face and scalp are supplied by facial nerves except levator palpebral superioris which is supplied by occulomotor nerve. It also supplies to buccinator, stapedius and styloid muscles. 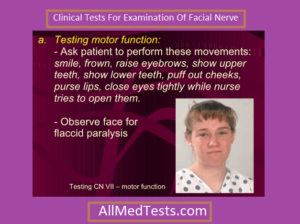 This results in paralysis of both upper and lower part of the face with atorphy of the facial muscles. It also causes loss of taste in anterior two third portion of tongue.

This mainly results in paralysis of lower half of the face because muscles of upper part of face has double bilateral innervation. It does not produce atrophy of facial muscles.

The taste sensation are described in other post here.