They control ocular movements so considered together. They are mixed nerves. They bring sensations from proprioceptors in the eye muscles.

Fibers of these nerves take origin from a series of nuclei which begin in the floor of sylvian aqueduct and extending up to the fourth ventricle. Abducent nerve innervates the lateral (external) rectus muscle and trochlear innervates the superior oblique muscle. All other extra ocular muscles, the spincter pupillae muscles of accomodation and the levator palpebrae superioris are supplied by oculomoter nerve.

Role of extraocular muscles in movement of eye ball can be learn here. 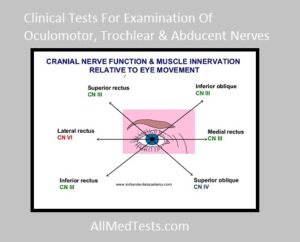 Abnormality of ocular movement in which axis do not meet at the point of fixation.

Involuntary rhythmic to and fro movement of eye ball.

Ask the subject to follow the movement of examiners finger with his eye in superior, medial, inferior, lateral and oblique directions. Stabilize the subject chin to prevent head movement. The examiner should observe that the movement of eye ball are smooth. If the full movement occurs, it is indicated that the muscles strength and nerve function is intact.

Examine the size and shape of the pupil in both the eyes.

It is done with the help of pen torch in dim light room. Each eye is examined separately. Ask the subject to see at a distant object. Through a bright light with the help of torch by bringing it from lateral side of the eye. Immediately observe the size of the pupil. Normally it should constrict.

Project the light in one eye only and observe the response in other eye. In this reflex other eye also shows contraction of pupil. To prevent entry of light in other eye the hand is placed at the nose in between the eyes.

When a person is asked to see a near object from distinct object, certain changes are taking place to see the near object clearly. These are: