A firm strong stroke across the skin using a pencil point or a key produces series of responses classified as:

This is known as triple response. 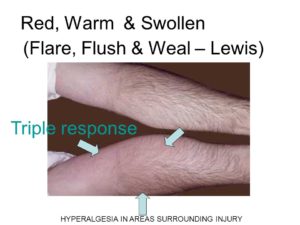 At the site of stroke, a red line appears. It is because of histamine and polypeptide released from the damaged site which cause capillary vasodilation.

It is due to dilation of the arterioles and precapillary sphinters which causes irregular erythematous area which surrounds the site of red line. Skin temperature overlying this area is raised. It is mediated by nerves but does not involve central nervous system.

If the stroke stimulus has been strong enough, a swelling of oedema develops spreading from the margins of the red line within the flare area. This is because of increased capillary permeability with rise in capillary pressure because of vasodilation.

A stick or key, spirit and cotton swab and subject.